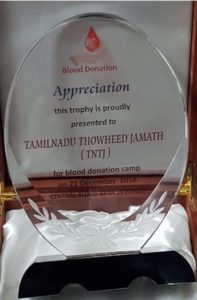 RIYADH: The King Saud Medical City – Riyadh, under the aegis of the Ministry of Health, Riyadh region has honored an outstanding expatriate social service organization Tamil Nadu Thowheed Jamaath (TNTJ) Riyadh chapter for giving continues support by holding blood donation for patients in the Saudi Arabia’s Capital.
.
The King Saud Medical City (KSMC) in Riyadh, which functions under Ministry of Health, recognized Tamil Nadu Thowheed Jamaath (TNTJ) Riyadh Chapter for giving continuous support for blood donation with KSMC & KFMC since past 15 years.
.
The voluntary organization has conducted several blood donation camps and emergency blood donation in Saudi capital regularly in accession with KSMC and KSMC, every years the group were donated the blood for Umrah & Hajj pilgrims.
.
“So far, we have donated thousands of units of blood for the past 15 years with KSMC and KSMC,” Mr. Mohamed Riyadh, assistant secretary to the Blood Camp of the TNTJ organization told. 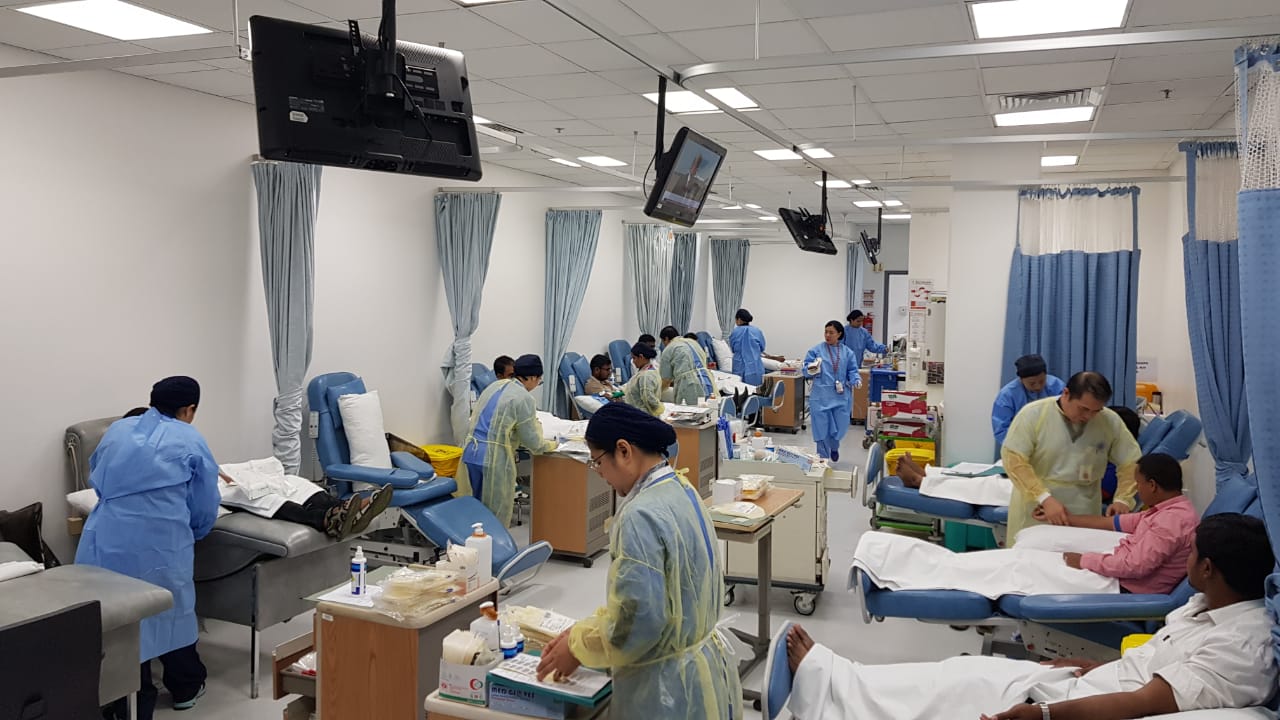 “This year only, alone more than 1517 blood donors were participated in many campaigns which was conduct in Riyadh City; out of which 1321 unit’s blood (594.45 liters) donated,” These camping got wide response from the donors in which peoples from Tamil Nadu (India) and neighboring states, even though Multinationals Mohamed Riyadh said.

“We are doing this service for the sake of Almighty Allah and we are happy that the King Saud Medical city has appreciated our service on many occasions,” the official noted. 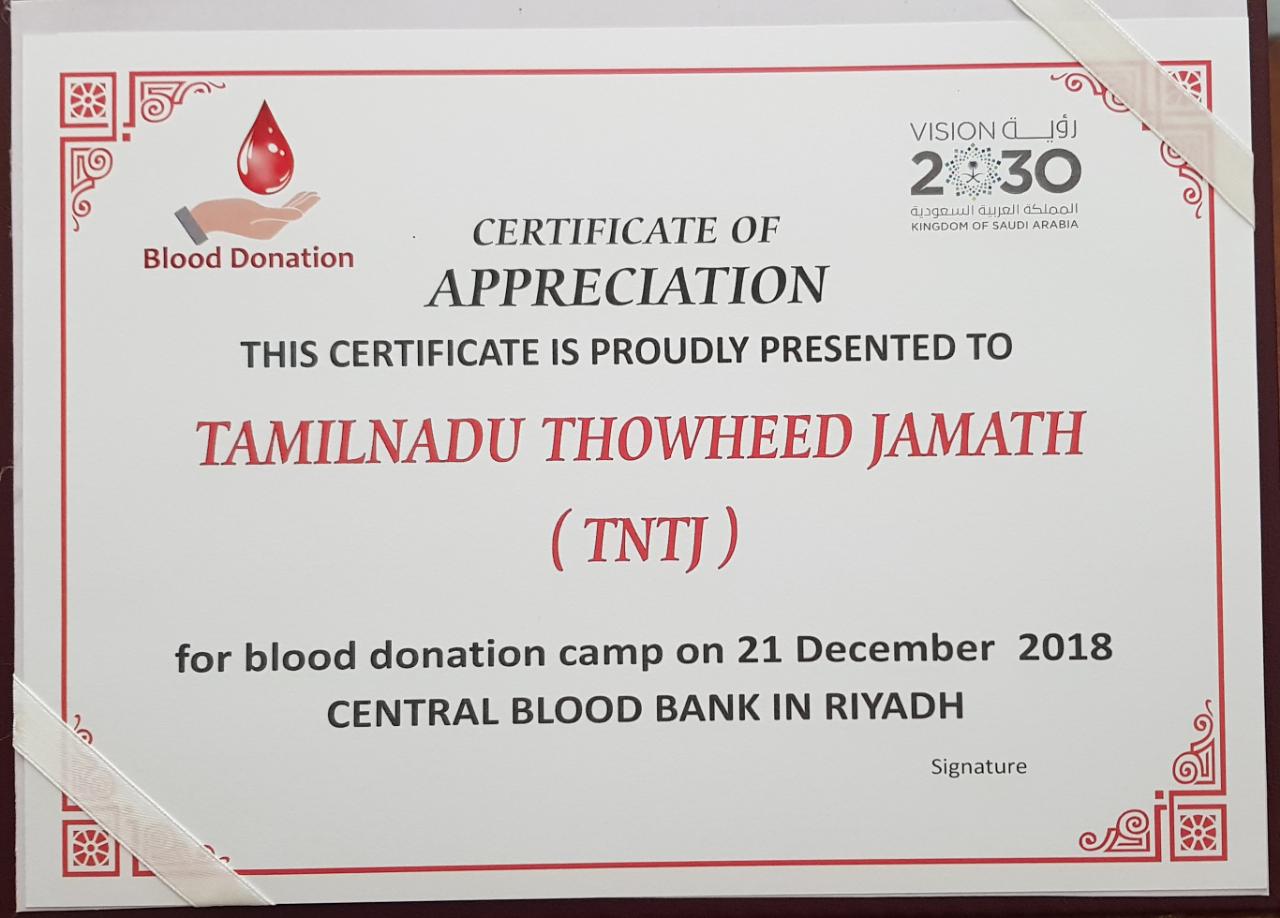 Recently, KSMC Blood Bank Chairman Dr. Ibrahim Al Deaile commended the TNTJ as the only organization in the Riyadh region, which has donated the highest volume of blood by a single group, furthermore TNTJ organizers for organizing such kind of noble work continuously, such camps gives an opportunity to understand true teachings of Islam and create social harmony among religion and races hatred against Muslim and Islam especially.
.
This certificate of appreciation was received by Chairman of TNTJ State Chief Executive Committee Member Brother M.S.Sulaiman during his recent visit to Riyadh.

However, TNTJ Riyadh Chapter was awarded three times in current year (2018) Including 2018, World Blood donor’s Day which conduct in KFMC. 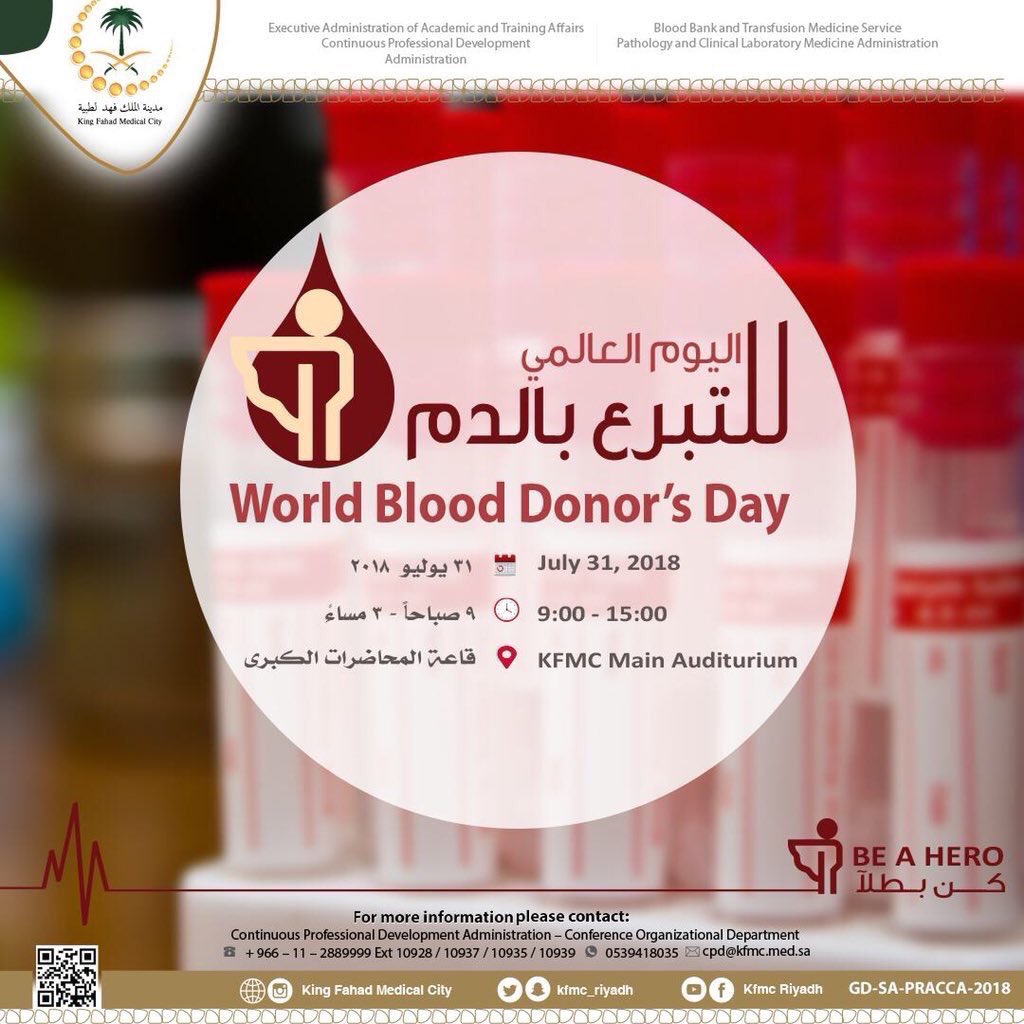 During the campaign, each donor underwent tests for high or low blood pressure, glucose and hemoglobin count prior to the donation to ensure that each donor was healthy. The checks also included scanning for communicable diseases.
.
The Ministry of Health does not import blood. Rather, all needed blood is collected from residents and citizens of the Kingdom who make voluntary donations.
.
An official from the Health Ministry stressed that blood banks are currently maintaining stable blood levels due to the generosity of donors.
.
All praise is to Allah.
RIYADH | TNTJ | BLOOD | CAMPING | KSMC | KFMC
Share on:
WhatsApp